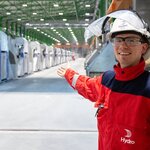 Targets reached: The final performance test done at Hydro’s Technology Pilot in Karmøy, Norway has shown positive results. Aluminium is being produced with around 15 percent lower energy consumption than the world average. 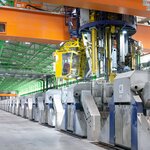 Production at the Technology Pilot started in January 2018 and the annual capacity is around 75 000 tonnes primary aluminium per year.

The goal has been to produce aluminium with an energy consumption at 12.3 kWh/kg – around 15 percent below the world average – and furthermore, to bring the direct CO2 emissions from the electrolysis process well below Hydro’s low-carbon aluminium average of 1.67 kg CO2/kg Al.
The full-scale NOK 4.6 billion pilot plant consists of 60 electrolysis cells using Hydro-developed HAL4e technology; 12 of the cells in the pilot plant, called HAL4e Ultra, have demonstrated energy consumption potential down to 11.8 kWh/kg.

Twenty of the 60 HAL4e pots were selected for the final performance test, which was conducted for 75 days between October and December. During the test period, a range of additional measurements were performed on a number of parameters and exact production figures were traced and recorded. The energy results came in at 12.27 kWh/kg Al – below the set target of 12.3 kWh/kg Al. The performance test furthermore demonstrated a record low level of direct CO2 emissions from the electrolysis process of below 1.45 kg CO2/kg Al.

We knew the targets were ambitious and this is unchartered territory and unique technology.  The successful performance test is a result of great collaboration and stamina from many parts of Hydro. I want to congratulate everyone involved in this milestone and not least our external partners, who have contributed to making this happen – says Head of Hydro Aluminium Metal Eivind Kallevik.

Next up for the Technology Pilot is to continue to optimize operations and support systems and prepare for the second-generation cells. These are under development at Hydro’s reference center in Årdal, Norway, including the prototyping of a cell concept that will be important for potential carbon capture technology.
Technology elements from Hydro’s Karmøy Technology Pilot are also continuing to be implemented in Hydro’s other production lines, to continuously improve operational and environmental performance. Technology elements have been installed at Hydro Husnes B line, which was re-started in November.
See video from Hydro's production start at the technology pilot:
Source: www.hydro.com
#aluminium_systems, #profile_systems