While the concrete base with integrated ground floor appears wedded to the rocky ground, the top floor timber construction floats like a viewing platform above it. 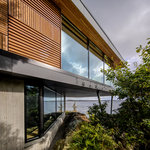 The 91 m2 family room on the top floor has a spectacular panoramic view provided by a floor-to-ceiling glass façade which runs over the corner (Schüco FWS 50.HI façade system combined with the Schüco ASS 70.HI lift-and-slide system). 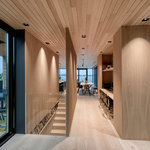 Access to the family room between the two patios. Thanks to the sliding doors, nature can be felt in all directions at any time of year (right and left: Schüco ASS 70.HI lift-and-slide system). 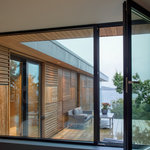 The smaller of the two patios on the ground floor points south. In addition to the sliding doors, windows provide summer ventilation options all over the house (Schüco AWS 70.HI).

On the Norwegian island of Karmøy, a young family has designed both the inside and outside of their home to blend in with the surrounding fjord landscape. Architect Tommie Wilhelmsen used colours and materials from the natural environment and opened out wide areas of the building envelope towards the spectacular panorama – with highly insulated façades, windows and sliding door systems from Schüco.

The family of five had inherited the land on the coast of the Boknafjord and, after living in the centre of Oslo for 15 years, decided to return to their home island of Karmøy. Their deep connection with the picturesque coastal landscape became clear in the precise briefing they held with architect Tommie Wilhelmsen. The building was to showcase as much of the surrounding nature as possible. Barriers between indoors and outdoors were to be dissolved. Natural and puristic materials – timber, metal, glass, concrete and natural stone – were to give expression to the floors, walls and furniture in the most simple and functional way possible, without detracting from the panoramic view. The clients placed increased value on floor-to-ceiling glazing in highly thermally insulated designs and with metal profile frame constructions that require as little maintenance as possible.

Architect Thommie Wilhelmsen took inspiration for the colours and materials from the surrounding nature, selecting oaks, natural stone, light-grey exposed concrete and black façade panels as contrasting materials to the narrow profiles of the floor-to-ceiling door, window and façade systems from the Schüco range. The myriad requirements are what led the developers to choose the company’s system technology. They were firstly looking for window, door and façade units with narrow profile face widths and large proportions of glass to maximise the views. Furthermore, long-term minimal maintenance, high functionality and very good thermal insulation values were required.

We chose Schüco system technology on the basis of its slimline appearance in conjunction with the high proportion of glass – confirms architect Tommie Wilhelmsen, adding that, due to the design features, energy-efficient profiles and aluminium as a material, Schüco was the first choice for meeting the requirements demanded by the rough climate of the Norwegian coast.

Allowing as many sections of the façade as possible to have variable openings was another idea that shaped the design, both in terms of aesthetic and climatic aspects for the building. On warm days, sliding doors, folding sliding doors and windows should bring nature as close as possible to all the main usage areas – with ease of access too. Ventilation throughout the summer months and excellent thermal insulation on colder days was to be ensured by the highly insulated system technology in conjunction with triple insulation glazing. These planning aims were achieved in an elegant yet functional way through a combination of the Schüco ASS 70.HI lift-and-slide door systems with the Schüco FWS 50.HI façade system. In the basement, this is six-metres-wide, floor-to-ceiling façade glazing which is arranged diagonally to the coastline and opens up the panoramic view towards the south east.
This created a relaxing hideaway with views that provide the desired feeling of comfort in the cooler, darker months. Above this, a façade running over a corner opens out the building envelope of the cantilevered floor towards the light from when the sun rises to early afternoon. The open patios with large glazed units on both sides of the building offer additional access to light and landscape from the rear space on the top floor.

Schüco system developer Alglass, based in Haugesund, was involved in the early project stages to provide planning assistance and advice for the technical configuration of the windows, façades and sliding doors. They also fabricated and installed the systems. To strike the perfect balance between high thermal insulation, sun shading, light penetration and security, the Schüco systems were fitted with multifunctional triple insulating glass units. A neutral sun shading coating was selected with a high level of light transmission of 70% and a low overall energy transmittance of 35%. The coating is attached to the triple-glazed units made from safety glass on the weathering side, providing reduced energy gains on sunny days when the windows and sliding doors are closed.

The architectural style of Tommie Wilhelmsen aims, by his own account, to create a direct reference and visual interaction between the natural space and living environment. In the case of Villa Melstokke, the style principles of the architect were fully aligned with the dream living space stipulated by the client. This created a holistic building design which consistently breaks down the barriers between landscape and building both in the building envelope and the coordinated interior design.

Since its launch in 2019, Yale’s Lockmaster AutoEngage...

With 15 more production sites having achieved...

ISO-Chemie to bring a range of online tools and products aROUND THE Baufuge 4.0 concept to Fensterbau Frontale

ISO-Chemie has packaged together a number of interesting...