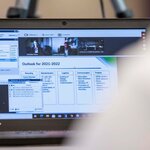 This year’s General Assembly was a hybrid and co-organized event: together with the RAL Gütegemeinschaft Kunststoff-Fensterprofilsystme e.V. (GKFP) and the Qualitätsverband Kunststofferzeugnisse e.V. (QKE), EPPA held its General Assembly in Mannheim, Germany. The event was organized in a hybrid format, allowing members to join physically or digitally only.
During the official part, EPPA members elected the following new representatives on the Board: Yann de Benazé (UFME/SNEP), Johann Brandstetter (Internorm), Gerald Feigenbutz (GKFP) and Alexander Franke (profine). Furthermore, the General Assembly confirmed the new President Patrick Seitz (aluplast) and his Vice-President Carsten Heuer (Rehau). Together, they will lead the association for the next 12 months.

Find out more at: www.eppa-profiles.eu

NGA Board of Directors Invite You to GlassBuild America 2021

Members of the NGA Board of Directors sent personalized...

Replacing windows on high rise blocks is typically an...