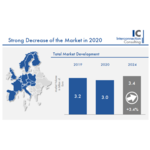 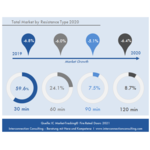 Last year, the market for fire doors in Europe suffered a pandemic-related setback of 6.2%. The market is not set to recover from this with significant growth rates until 2022. A market volume of 3.4 billion euros is expected by 2024, as a study by Interconnection Consulting shows.

The market volume for fire doors in Europe fell from 3.2 to 3.0 billion euros in 2020. Although declines were recorded in all the submarkets studied, they were of varying degrees. Germany, the largest market for fire doors in the EU, recorded a decline of almost four percent, following the current weakness in non-residential construction activity. Despite this decline, however, Germany can still do very well in comparison. Italy, for example, recorded a hard crash of -15.4%. In the Benelux countries and Great Britain the decline was 9.5% and 8.6% respectively. The Scandinavian region recorded a minus of more than 5%.

Alternatives to Steel in Demand

The rising prices of steel have led to an increase in market share for other materials such as aluminium. Nevertheless, the steel segment remains very strong with a share of more than 40%, while the wood segment continues to lead with 46% shares in value. However, demand for the different material types varies greatly from country to country. While steel fire doors dominate in Germany, in France and Great Britain it is the timber segment.
Wood is mainly used for fire doors with longer fire resistance (90min, 120min), while steel is mainly used for fire doors with shorter fire resistance (30min, 60min), due to the otherwise sprawling door thickness. Fire doors with 30min fire protection are the strongest market segment with a market share of almost 60 percent.

The European market for fire doors is characterised by high price differences between the individual countries, which is mainly due to different fire protection regulations in the European countries. The latest hopes were now based on a harmonisation of safety standards in the EU and Turkey through the introduction of the new product standard EN 16034. The new regulation should have come into force at the end of 2019 for all fire doors, but for the time being interior doors and automatic doors remain excluded from the labelling and are still subject to the standards of the respective country.
Experts say that this makes it more difficult for manufacturers to offer their products throughout Europe according to a standardised norm. The new standard currently only applies to exterior doors as fire doors and sliding doors.

Considering that the market share of these areas is almost negligible, standardisation has not brought anything so far – criticises Sasa Spiridonov, the author of the study. – It is still unclear when the entire product range will finally be subject to uniform standardisation.

Urbantech: 10 more start-ups to accelerate the development of sustainable cities