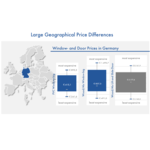 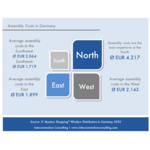 The mystery shopping test by Interconnection Consulting shows the regional differences in the German window market. It shows that windows are cheapest in the west and most expensive in the north.  A total of 18 window manufacturers were put under the microscope.

At 470.2 euros, the most expensive PVC windows are sold in the North. In the West, the price was on average 70 euros lower. The East and Southwest of Germany were also still above the average price of 437.3 euros. The surcharge for increased security (increased window security, lockable handles) was around 14 percent in the PVC segment.
The most expensive wood/aluminium windows are also sold in the North with an average price of 962.8 euros. The West is also the cheapest in this segment. For increased security on wood/aluminium windows, one has to spend about 10 percent more on average than for basic security.

In addition to the security features, however, it is also the brand that plays a decisive influence on the price, as the study clearly shows – explains Panorea Kaskani, the author of the study.

The average assembly costs were 3,042 euros, with the price range varying greatly in the five regions we studied (North, West, Southwest, East, Southeast). In this category, too, the North is clearly at the top with over 4,200 euros. The lowest installation costs are found in the South-East of the country at around 1,700 euros.
Not even a quarter of suppliers grant discounts. Of the roughly 77 per cent who do not grant a discount, more than half would however grant a discount after a personal discussion or when concluding the contract.
source: interconnectionconsulting.com
#market_intelligence, #windows

ReFrame – For the first time in Germany, pilot project with windows made of 100 percent recycled PVC-U

EPPA member companies are very concerned about the wave...