New opportunities for windows opened up by the coronavirus 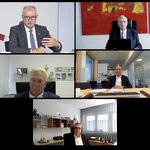 New opportunities for windows opened up by the coronavirus

A new era for windows might not begin in the post-coronavirus world, but the greatly increased public awareness of their importance during the pandemic is likely to last.

If the industry uses this emotional momentum correctly, it has a realistic prospect of generating more business. This was the central summary of a virtual panel discussion held as part of the 15th International Roto Trade Press Day. According to the organiser, the group comprised of a number of experts at the start of November also unanimously agreed on a second point: the coronavirus should not be used as a direct topic of communication when addressing private customers – but with commercial and public target groups, this subject is by no means off limits.
As the experts stated, it is ultimately important for the initiator of the communication to cover a wide spectrum of expertise and opinions in the discussion. While Helmut Meeth spoke on behalf of window manufacturers in his role as President of the German Window and Facade Association (Verband Fenster + Fassade, VFF) and Acting Partner of his company, based in Wittlich, Rhineland-Palatinate, Heinz Haskamp, Managing Director of Haskamp Fassadentechnik in Edewecht, Lower Saxony, represented the facade construction industry. Josef Haas, Acting Partner of Kampa in Aalen/Waldhausen (Baden-Württemberg), provided the perspective of a prefabricated house producer. Dr Eckhard Keill, Director of Roto Frank Holding AG, represented the supplier industry. Tuning into the event from Berlin was forsa Director Prof. Manfred Güllner, who introduced cross-sector general and current social research findings to the discussion chaired by agency owner Frank Linnig.

According to the organiser, the institute founder firstly stated that the coronavirus is ruling people’s day-to-day lives in Germany. All other urgent problems, such as environmental and climate protection, have been forgotten right now. Citizens’ empirically proven focus on their own four walls is also causing them to spend „a great deal of money” on their homes. There is a strong likelihood that this will remain the case even after the pandemic is over. In this context, a new importance can be attributed to windows. Güllner’s advice for the industry: Create an emotional connection with builders and renovators. You won’t achieve that with factual reasoning alone.
This is a plea which the other participants in the discussion essentially agreed with in regard to private users, reports the organiser. Using CO2 reduction as an example, Haas and Keill pointed out that specialist topics and emotionality are not mutually exclusive. Meeth considers the modern window generation to offer enough starting points for this discussion already: We’re talking about comfort, security and appearance. However, he noted that there is a huge need for improvement in the design of brochures geared towards consumers. The common practice here of waxing lyrical about a window is dreadful and does not stir up any emotions whatsoever. Haas added another shortcoming: We want to get people excited about windows – but our brochures only show products. That will no longer be happening at our company in the future.

Sometimes one thing, sometimes another

When asked by the chair whether the topic of the coronavirus should be mentioned in communication relating to windows, the group’s unequivocal answer was „it depends”. For private customers, it is more counterproductive and should therefore be avoided. In this case, it is better to reinforce and positively address the insights obtained by people during the pandemic. Keill considers the following question to be suitable for such cases: Have you ever considered a ventilation concept in your home for effective impact ventilation?
The situation with professional target groups is completely different. Haskamp recommends discussing the coronavirus directly with them if necessary to clarify the need to take action and invest. Ventilation in schools and public buildings, which is indispensable to control infections, is currently the best example of this. The facade construction specialist underlined that there is a great deal to be done here because maintenance tasks have been neglected for years.

To conclude, Keill expressed his hope that the boost given to the image of windows by the coronavirus, and the resulting business opportunities, will not remain specific to Germany. At least in Central Europe, he believes it is important to intensively and professionally convey the immense added value offered by windows. The aim also has to be to increase awareness of the important role held by windows in the long term at global level too. To do so, the experience gained from the pandemic can play a tangible role, explained the head of Roto to an audience of around 70 specialist journalists from 14 countries who tuned into the virtual event.
#window_hardware, #door_hardware