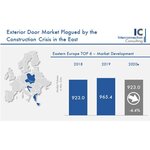 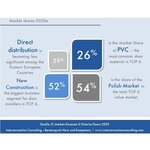 The market for exterior doors in Eastern Europe is set to lose 4.4% in value this year due to the economic consequences of the pandemic. Due to the decline in building completions in the next few years, the market in the six countries examined (Poland, Czech Republic, Slovakia, Slovenia, Croatia, Greece) will only recover a little in 2023, but will still not have reached the pre-crisis level, as shown in a new study by Interconnection Consulting.

The construction sector naturally has a major impact on the market for exterior doors. While the sales of exterior doors in 2020 are only expected to experience a small decline due to the delay in construction completions, the study does not expect the full impact of the COVID-19 crisis until 2021, at which point a double-digit decline can be expected for the overall market.

Poland is Fighting the Downturna

In Poland, the largest market for exterior doors in Eastern Europe, the decline in volume between 2019 and 2023 will amount to an average of 1.6% per year. The country is thus in a better position than the overall market (-2.3%). The Polish market will benefit from the large government intervention package of 300 billion zloty for the economy. Nonetheless, despite the high fiscal expenditure, we can already see the economy is losing momentum, causing a decline in residential construction.
In Slovakia, too, the economic decline will not be as severe as in other countries. The economy is expected to return to its pre-crisis levels by the end of 2021. Interconnection expects sales of 72,100 exterior doors in 2023 with a turnover of €99.1 million.
The Czech Republic has seen a sharp increase in construction activity since 2015, which peaked and ended in 2019. The number of building completions over the next three years will decrease by an average of 3.1%. The number of exterior doors sold is expected to drop to 119,300 in 2023.
Slovenia, however, has been hit harder by the crisis. No substantial growth is expected until 2023. The expected sales will be 31,700 in 2023.
Croatia is also more affected by the crisis than the Eastern European market as a whole. Robust growth in both renovation and new construction is not expected until 2023. A sales volume of 52,000 units is expected in 2023.
While the Greek construction sector boomed in recent years and showed growth rates of around 40 percent in 2019, Interconnection expects a decrease of 4.1% in building completions this year. The COVID effect will be even more noticeable in 2021. In total, Interconnection expects sales of 96,000 exterior doors in 2023.

Aluminum is Catching Up

The exterior door market in Eastern Europe is dominated by PVC and aluminum. Together, these two materials cover over half of the overall market. However, it turns out that PVC in particular will lose market share in the next few years, while aluminum doors will expand their market share slightly. Overall, residential construction is the largest sales segment for exterior doors with 67.8%. While PVC doors dominate in residential construction, aluminum is number one in the non-residential sector (39%).
source: www.interconnectionconsulting.com
#market_intelligence, #door_market

On Tuesday last week, production resumed at the Hydro...

Now that the holiday season has arrived, things are...

Through this revolution that takes the name of Industry...