How to bend flat glass perfectly around corners 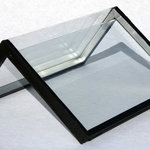 A double-glazed corner element produced with the new glass-bending process. 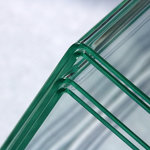 Using the new laser-based glass-bending process, it is possible to achieve precisely defined and extremely small bend radii, so that even laminated safety glass can be bent around a corner. The sheets of glass in the image are three millimeters thick.

Researchers from the Fraunhofer Institute for Mechanics of Materials IWM have developed a new process that can bend sheets of glass to produce angular corners.

Unlike conventional processes, this does not impair the optical properties of the glass. Bent glass looks destined to play a key role in future building design, and there are also potential applications in the fields of medical technology and industrial design.
Generally speaking, window glass is flat. When constructing the walls of a building, apertures are therefore left for windows to later be inserted. Occasionally, however, smart office blocks and apartment buildings feature windows that wrap around the corners of the structure. To achieve this, window manufacturers join two panes of glass at an angle, using either a metal profile or an adhesive bond. Now, however, researchers from the Fraunhofer Institute for Mechanics of Materials IWM in Freiburg have developed a spectacular way of bending sheets of glass – to angles of 90°, for example – so that the corner thereby produced is sharp and angular. In other words, they have made the corner an integral part of a single sheet of glass.

We’ve already had lots of positive feedback from architects – says Tobias Rist, a specialist in glass forming at Fraunhofer IWM and head of the Glass Forming and Machining group. – A lot of them are now keen to know when this corner glass will be available. But our lab system only processes sheets of glass one square meter in size, so we’re only able to produce prototypes. The research team is therefore eager to join forces with partners and scale up the process to produce larger formats.

Glass with an angular corner of 90°

Machinery for bending glass does of course already exist. Current technology, however, is incapable of producing narrow curvatures or a clean-edged bend of 90°. What’s more, conventional processes often impair the optical properties of the glass. In order to bend a sheet of glass, it is placed in a metal mold and then reheated. This renders the glass soft and malleable, so that it can be shaped according to the contours of the mold. This can cause the glass to deform at the contact points with the support.
So once the glass has cooled down, faint imprints remain that are visible when inspected at close range. Moreover, the molding process causes corrugations to form on the surface of the glass, with the result that light is no longer reflected uniformly. When passersby look at the curved parts of a building’s glass facade, the reflections of objects such as trees or street signs therefore appear distorted. Similarly, objects viewed from within the building look strangely skewed.

The team from Fraunhofer IWM has circumvented this problem by developing their own kiln. Instead of heating the entire sheet of glass until it becomes soft, only the area of the glass where the actual bending is to take place is heated to that point. This is done by means of a laser and mirrors, which guide the powerful beam along the bend line. The kiln is heated to around 500° Celsius, just below the so-called glass transition temperature, at which point glass becomes soft.

And then the laser only has to heat the glass at the relevant area by a few more degrees until it reaches the glass transition temperature, and we are able to bend it – Rist explains.

In this case, bending is accomplished by means of gravity. In the kiln, the sheet of glass rests on a support that only extends as far as the line of the future bend. Once the laser has heated the glass along this line, the sheet of glass becomes soft and bends purely through the force of gravity. Since only the line of the bend is heated until soft, rather than the entire sheet, there are no imprints created where the sheet rests on the support. In other words, the glass remains perfectly smooth except for where it has been bent.

In developing the process, the researchers first constructed sophisticated computer models of the bending process. This showed them how fast the laser has to travel in order to ensure that the glass becomes soft in the required manner and as uniformly as possible. Since glass is a poor thermal conductor, it was also important to calculate how rapidly the heat from the laser penetrates from the surface to within the glass and the extent to which the heat from the laser spreads laterally from the laser point into the sheet of glass. Armed with the knowledge gained from the modeling process, the researchers then set about experimenting.

We now know how to control the laser in order to bend glass of the required thickness to achieve the exact angle – or bend radius – we want – says Rist. – We’re the first to be able to produce a 90° bend like this. Architects who’ve seen the results are really excited.

Furthermore, the process can also be used to bend a series of glass sheets to specific, graduated radii so as to produce sandwich structures and sheets of laminated, safety and insulating glass.
According to Rist, there are potential applications in many other areas apart from architecture as well – including industrial design. For example, this technique could be used to cover household appliances with a continuous sheath of glass, instead of the usual combination of plastic and metal sheets. This glass skin would extend down from the top to the angled front of the appliance, without gaps or joints, and cover a touchscreen control panel. Such a design would be not only highly attractive but also simple to clean on account of the gap-free surface.
For reasons of hygiene, glass is also an ideal material for the manufacture of medical equipment. Steel, by contrast, is relatively easy to scratch. High heat or strong disinfectants are then required to eradicate the germs that can accumulate in the scored surface. Equipment with a glass surface is much easier to clean, not least because glass is highly resistant to scratching and is able to withstand aggressive cleaning agents.

Using our process, it would be possible to produce a single glass sheath to cover the top and sides of such equipment – says Rist. – And this would also avoid any edges or joints where germs could build up.

In fact, there is a whole host of applications where this new glass would prove beneficial, including store fittings such as display cabinets and refrigerated counters. Rist and his team are therefore keen to work with manufacturers from a wide variety of sectors.
Source: www.fraunhofer.de
#glass, #glass_processing, #bended_glass

On Wednesday 19, in the context of the revision of the...

Following four years of work on improving the recycling...

BriteGuard® Pro – Protecting Your Surface in a Matter of Seconds

Located on the Elbe River, on the western tip of the...

Riding the wave of success at previous editions, Tecglass...