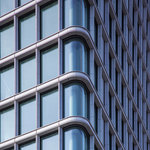 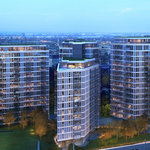 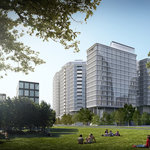 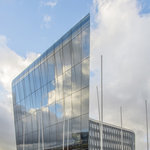 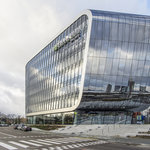 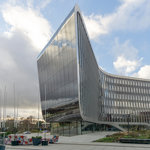 In demanding, sustainable construction projects, the psi value of a warm edge is not the only thing that counts. The importance of aesthetics, precise, automated application and durability has caught up with the burning issue of energy efficiency – as demonstrated by two flagship projects in Vienna and Vilnius.

When the world's first metal-free Warm Edge Spacer System was introduced in the form of Super Spacer® in 1989, the term sustainability was just transforming from a niche notion into a mainstream one. "Super Spacer already offered the option of thermally optimising edge seals even before the era of Low-E thermal insulating glazing had commenced. We thus proudly view ourselves as pioneers of the warm edge”, states Joachim Stoss, Managing Director of Edgetech Europe GmbH. In its anniversary year the European subsidiary of the Quanex Building Products Corporation which produces its flexible spacers in the United States, Great Britain and Germany is very optimistic about the future. The industry anticipates a further tightening of the regulations for energy-efficient construction, whilst ambitious builders and investors are also placing sustainability, with all its facets for new buildings, at the top of their list of priorities. A recent market survey conducted by Global Market Insights forecasts an annual demand of 100 million warm edge metres for commercial buildings in Germany alone by 2024.

Warm edge technology has long been state of the art

A low Psi value for the thermal bridge at the edge of the glass is, and will continue to be, an essential asset for a positive energy balance – that’s also according to Hanspeter Petschenig, Managing Director of Petschenig glastec GmbH. In the case of its latest flagship project, the attractive PARKAPARTMENTS AM BELVEDERE and the Hotel Andaz Vienna at the Belvedere in Vienna, planned by the Renzo Piano Building Workshop, the Austrian glass processor supplied some 15,000 square metres of heat and sound insulating, as well as drop-guard, insulating glass elements complete with Super Spacer®. The company Flintermann Glasverdelungs GmbH, based in Lower Saxony, Germany, contributed by providing curved insulating glass elements for some of the building edges.

The demanding geometry of the glass panes really did put our team to the test – explains authorised signatory Reinhard Gruber.

Five large-format single panes, tapering straight at the ends and a central bend with a very narrow radius, have been combined with Super Spacer® TriSeal™ Premium Plus to form triple-glazed insulating glass units.

Modern architecture in harmony with nature

The real estate project in the new Belvedere urban district to the southeast of Vienna's main railway station was commissioned by the SIGNA Group, or more precisely a SIGNA Group/Hyatt joint venture, and was challenging in every regard. The original project developer had already recruited the Italian architect back in 2008. A state-of-the-art high-rise building in the immediate vicinity of the Baroque palace grounds of Belvedere, the Swiss Garden and the Botanical Gardens had to be designed in such a way that the Belvedere world heritage site was not impaired, as Piano stated at the time in an interview on the subject. His architectural credo in terms of urban design aesthetics is as follows: leaving the past the space it needs, but always looking into the future. One of his architectural goals is to put an end to soulless peripheral city districts. Suburbs must become urban centres with social and cultural meeting places, that bring people together and where they enjoy living.
At the same time, Piano is one of the pioneers in the field of sustainable construction, uses durable materials and seeks to establish a connection with the surrounding nature through his architecture. The 342 apartments and the 303-room hotel complete with skybar, ballroom and a large convention area are spread over five towers with polygonal floor plans that are set up on slender pylons measuring several meters in height. Piano’s columns were inspired by the tree trunks in the surrounding parks. The green areas under the towers have the effect of virtually extending the adjoining Swiss garden into the grounds that cover an area of more than 10,000 square metres. The beautiful view “Belvedere” is impressively transformed into reality here as the first storeys float above the treetops, and a unique, stunning view of Vienna that also extends into the distance emerges from the towers.

28,000 square metre facade is being put to the test

A mullion-and-transom 28,000 square metre facade was chosen for the ground floor of the two hotel towers that are designed in the form of an elemental facade. Also where the facade’s material was concerned, Piano once again searched for the connecting element. In homage to the historic brick facade of the neighbouring former arsenal of Vienna, he chose ceramics, a material that Piano repeatedly uses due to its natural origin, durability, ability to reflect light and its versatility. Among other things, Strabag Metallica that was in charge of the project, installed 60,000 grey glazed ceramic strips with a total weight of 770 tonnes and 1,100 triple insulating glass units within the 5,600 facade elements. Just six months passed from the issuing of the order in May 2017 to the installation of the first element. A Herculean task, due to the fact a time-consuming testing process had to be gone through between the planning or design, and manufacture of the components. All elements had to prove during the simulation as well as on the test bench that they meet the high civil engineering requirements placed upon the thermal insulation and sound insulation.

Without an automated insulating glass line, a project with such tight deadlines and quality specifications is virtually impossible to tackle – Hanspeter Petschenig confidently claims. – The robot-controlled application of the flexible Super Spacer guarantees the total parallelism of the glass panes on the one hand, on the other hand the production is, of course, performed much more quickly since a flexible, thermo-set spacer does not have to be bent, nor filled, connected and PIB-applied. Especially where large, floor-to-ceiling panes are concerned, such as those used in the Belvedere project, the precise application down to the last millimetre of the flexible spacer constitutes a decisive criterion. The appearance of a spacer is assuming ever increasing performance according to Petschenig. Super Spacer reflects the colour of the frame profile and thus appears completely neutral in colour.

Super Spacer® is also in high demand for sustainable showcase projects in Northern Europe. The Green Hall Valley with its three Business Centres in the Lithuanian capital of Vilnius, designed by Arrow Architects from Denmark, is one of them. Room cooling through air circulation ensures a pleasant microclimate, a geothermal heat pump covers more than 80% of the heating and cooling requirements. The first building complex Green Hall 1 was constructed in 2009, Green Hall 2 was opened in 2017. The energy efficiency class A building is also a prime example of how architecture can harmoniously be merged with the environment. The sweeping facade follows the bend of the Neris river, on the banks of which the Green Hall Valley is located, and the landscape is reflected by the window panes. Cars are banished beneath the earth ensuring the overall natural appearance is not impaired. The facade elements were manufactured by Schüco in Germany, while the planning and assembly was performed on site in Lithuania by KG Constructions UAB. The architects paid attention to the principles of sustainability even where the most miniscule details were concerned. Thus, the insulating bars of the façade system are produced using polyamides from renewable raw materials.

In order to let in as much natural daylight as possible and thus also thermal energy into the building’s interior, the double facade covering an area of 3,800 square metres consists of triple insulating glass units with solar control glazing on the outside and thermal insulation glazing in the middle. It achieves an impressive Uw value of 0.6 W/m²K. Flintermann Insolierglas GmbH supplied the concave-curved triple insulating glass units for the curved edges of the façade, in a 2.800 x 3.800 format using exactly the same window pane design, and 16 mm Super Spacer® TriSeal™ Premium Plus as spacer.

Super Spacer TriSeal Premium Plus is our product for simple manual processing using large-format insulating glazing and facade glass panes due to the fact the polyisobutylene seal is already pre-applied by us – explains Edgetech’s authorised signatory, Johannes von Wenserski.

Reinhard Gruber added: When using curved insulating glass units of this size, and what’s more in a climatic zone where it can be extremely cold in winter and very hot in summer, the spacer is of particular importance for the durability of the edge seal. A flexible spacer offsets any weather-related pumping movements, thus reducing the pressure on the primary seal, whilst we also have the necessary flexibility during the production of curved special forms.

On Wednesday 19, in the context of the revision of the...

Following four years of work on improving the recycling...

BriteGuard® Pro – Protecting Your Surface in a Matter of Seconds

Located on the Elbe River, on the western tip of the...

Riding the wave of success at previous editions, Tecglass...