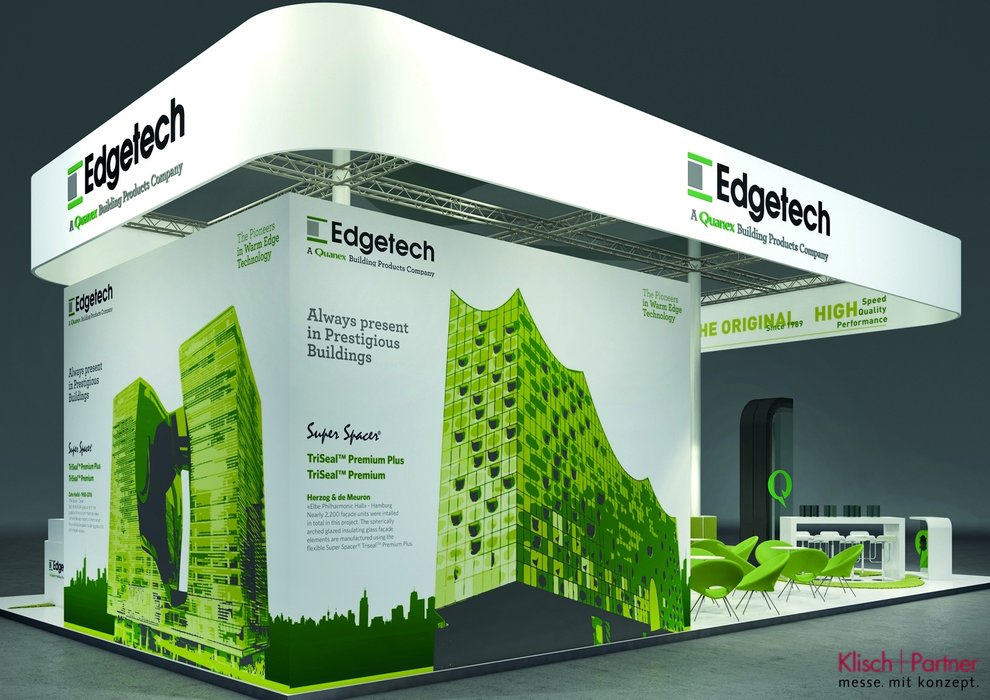 The flexible Super Spacer® made of structural foam is the pioneer among warm edge spacer systems.

At the world's leading trade fair of the glass industry, Edgetech/Quanex will be showcasing the many potential applications of its products based on well-known buildings such as the Elbphilharmonie (Elbe Philharmonic Hall), the Kö-Bogen or the Copenhagen Maersk Tower from 23 until 26 October 2018 at Stand C 61 in Hall 17.
Heinsberg, July 2018. Worldwide Quanex Building Products Corporation sells more than 300 million metres of Super Spacer® annually in over 90 countries. Its wholly-owned subsidiary Edgetech Europe GmbH is not just a significant sales hub of the company, but also a development centre and the largest production location in Europe for the flexible spacers. The Heinsberg-based company will act as the host of the Quanex group at its home trade fair in Düsseldorf.

Over a period of almost 30 years the company´s product has been included in an impressive number of noteworthy structures. We want to celebrate this with our customers at glasstec 2018.

Said the company’s managing director Joachim Stoss.
Under the motto of "Always present in Prestigious Buildings", Edgetech will be demonstrating the versatility of its Super Spacer® warm edge spacer system in state-of-the-art glass architecture. An essential aspect in the selection of the buildings was the different climate zones ranging from Scandinavia to the Gulf region.

A warm edge spacer must, despite the mechanical forces constantly acting on the edge seal, remain impermeable for decades.

Obviously, this applies in particular to extremely cold and extremely hot regions or to climatic zones in which rapid, weather-related temperature changes are a regular occurrence. A spacer such as the Super Spacer, absorbs the pumping motions of the panes of glass by virtue of its flexible structural foam and prevents wear of the primary seal and thus the possible entry of air into the space between the panes.

Another focal point of the trade fair is state-of-the-art glass architecture, which has repeatedly set new milestones in the recent past in buildings such as Zaha Hadid's "The Opus" in Dubai or the Elbphilharmonie in Hamburg.

Round is the new rectangular, and triple insulating glazing is the current standard in the field of window and facade technology.

Explains Joachim Stoss.
In the opinion of the Heinsberg-based company hardly any builders or developers need to be convinced any more of the advantages of warm edge spacers, such as markedly improved energy efficiency, an optimised indoor climate and elimination of condensation in the spaces between the panes.
For this reason, warm edge spacer is increasingly attracting attention in production technology terms, particularly in view of the fact that curved windows and free-forms can only be designed with flexible spacers as multiple layer insulating glazing. Precise application down to the last millimetre, even on large panes of glass, is possible both manually and in an automated manner when using a Super Spacer® system, and is of particular interest to the manufacturers of insulating glass units as well as the window and facade builders visiting the glasstec trade fair.
#Super_Spacer, #structural_foam, #spacer_systems, #glasstec_trade_fair, #Edgetech
SPRAWDŹ OFERTĘ FIRMY